Everything You Need to Know About The Gold-Silver Ratio 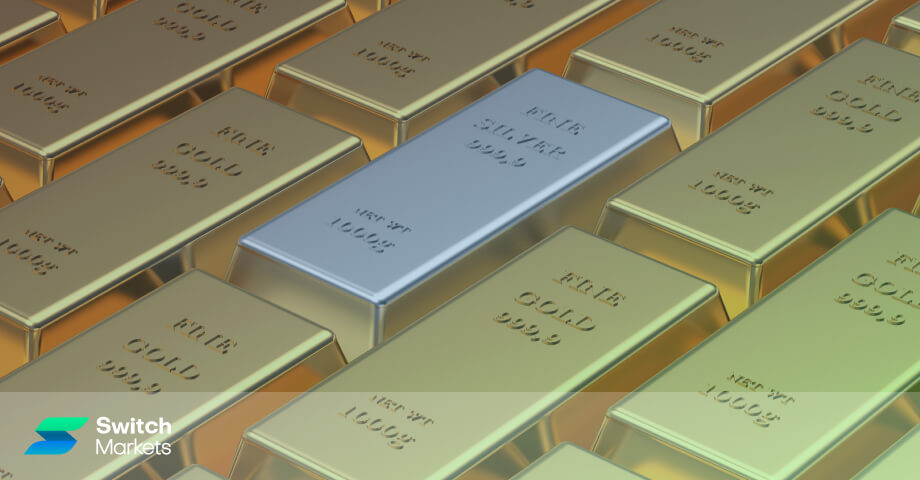 As its name suggests, the gold to silver ratio is a ratio that measures how many ounces of silver are needed to purchase just one ounce of gold. Due to the historic role of these two commodities and the fact that both gold and silver are extracted from the earth, many investors believe that it is a reliable indicator to predict gold and silver’s future performance.

But how can you use this ratio in your trading? How does the gold-silver ratio really work? And what is the magic ratio number of the gold to silver ratio?

Key Points to Take Away

Understanding the Gold to Silver Ratio

From the basic point of view, gold and silver are some of the only precious metals commodities with intrinsic value that are not influenced by inflation, deflation, and the uncertainty of the world economy.  Each precious metal has its own unique features that remain irreplaceable until now, and both of them are expected to be even more precious in the future.

Historically, these two metals became a legal form of money around 700 BC when the first Roman coins were issued to the public. Since then, gold and silver have had a strong financial connection known as the gold to silver ratio. As a matter of fact, the gold to silver ratio is most likely to be one of the most historical ratios to be made and it remains a significant ratio in the financial system until today. In Roman times, the gold-silver ratio was fixed at 12:1 and by the 18th century, the ratio was set to 15:1 in the United States and to 15.5:1 in France.

During the 20th century – when the free market economy has developed – the average gold-silver ratio was 47:1 though it experienced lots of extreme highs and lows over the century due to the great depression, the gold standard act in 1900 and the decision of the US government in 1971 to no longer convert US dollars to gold at a fixed rate.

Since the beginning of the current century, it was mostly trading at a range between 40-80 until the ratio peaked to an all-time high of above 126 due to the impact of the Covid-19 pandemic in early 2020. But once again, since the economic recovery started in May 2020 and the end of lockdowns have resulted in a massive rebound in global economic activity, the spread dropped to be trading around 60-80.

Simply put, the ratio measures how many silver ounces are needed to purchase one ounce of gold. It is a fairly simple ratio that calculates the relationship between the gold spot price and silver spot price. Meaning, anyone can make this calculation by dividing the price of gold by the price of silver.

So, what’s the big story with this ratio? Well, for many reasons and in many ways, the gold-silver ratio has been an extremely reliable indicator to make investment decisions by gold and silver traders. This can be attributed to the high correlation between the two assets, and perhaps even the myth of the gold to silver ratio.

Regardless, many traders take advantage of probably the most basic and simple ratio out there.

Why Does the Gold-Silver Ratio Matter When You Trade Precious Metals?

Throughout modern history, gold and silver have been human’s most pure and widely used forms of money. That made the gold and silver ratio such a vital piece of information and even nowadays, the ratio is being used by metals merchants and traders.

In trading, investors who trade gold and silver, as well as other precious metals, use the gold-to-silver ratio as an indicator for the right time to make a purchase or to sell one of the metals. Also, according to geologists and ‘rational’ traders, the ratio should be close to the ratio of silver to gold in the earth’s crust. If this is the case, then there’s no doubt that the gold-silver ratio should drop at some point. Theoretically, some people believe that the ratio should be set at 16:1 in favor of gold, which is the same ratio it has been trading for centuries. Others even take it further stating that in the current market conditions at which silver is widely used in industrial applications and electronics, the ratio should be in favor of silver.

Nonetheless, in my view, for the average Joe trader – there’s no question about the importance of the gold-silver ratio. It has been there for thousands of years and is closely watched by professional day traders and long-term investors.

Trading the Gold-Silver Ratio – How Does It Work?

In essence, trading the gold-silver ratio works on a very simple principle. As mentioned previously,  the ratio simply measures the number of silver ounces an investor needs to trade in order to receive one ounce of gold. For instance, if gold (XAU/USD) is trading at $1860 per ounce and silver (XAG/USD) is trading at $25 per ounce, then the ratio is set at $74.4.

Generally, some investors believe the ratio should be in line with the availability of the two metals extracted from the earth. It should also be traded somewhere between the average levels since the early 20th century that fall somewhere between 50-60.

Therefore, as mentioned, the ratio is only being used as a technical indicator to buy and sell one of the metals on the assumption that assets should be trading close to their averaged ratios. Obviously, the ratio fluctuates to extreme prices from time to time, which is an indication for investors to buy or sell one of the precious metals with the hope that the ratio will be trading again at ‘normal’ levels.

For example, when the Covid-19 pandemic burst, the demand for gold was higher than the demand for silver, which caused a very high spread between the two precious metals. How high? Some experts and historians say it has been the highest level in 5000 years. But then, as things calmed down following the pandemic crisis, the gold and silver ratio dropped from 126 to its slightly above average levels of around 70.

What was the catalyst behind the huge drop? Simply because the demand for silver was higher than the demand for gold in the industrial world, especially at times of trade shutdowns. So, when economic activity went back to normal, silver prices rose more than gold, and the spread tightened.

As evident from the above – while gold is mainly a safe haven asset, silver is one of the most highly traded commodities and widely used metals in the world – it is used in a variety of products including LED lighting, solar panels, touch screens, TV screens, mobile phones, water purification, and other electronic equipment.

How to Day Trade the Gold Silver Ratio?

Another interesting approach to using the gold-silver ratio is through intraday trading. Clearly, there must be a strong correlation between yellow metal and silver, especially when these two metals are known as safe-haven assets and are being used for a variety of similar purposes. So, how can you actually use the gold to silver ratio in short-term trading and implement it in your trading strategies?

First, if you closely watch the trading screens on a daily basis, once in a while you might be able to notice an early sign from one of the two metals – meaning one precious metal moves in a certain direction before the other metal makes the same move. For instance, if gold prices rise but silver prices are neutral or fall on the same day, then a good position to take in this case is to buy silver (or short-sell gold).

Lastly, another trading strategy is to analyze the trend for both the gold and silver ratio and the assets on their own. In this case, you can use the following formula to decide which one of the metals is in the strongest trend and thus, to buy or sell a certain metal.

In conclusion, the gold to silver ratio could be a handy tool to determine when you enter a gold or a silver position. Working in the commodity trading space, I’ve heard many gold and silver traders constantly talking about the gold-silver ratio and its huge impact on market speculation.

All in all, in my opinion, it’s not too complicated to take advantage of the gold-silver ratio when trading precious metals. You should always place silver below gold on your watchlist and follow the gold-silver ratio. Then, you’ll be surprised by how many trading opportunities you’ll be able to find when using this ancient ratio. After all, even the Romans and the Greeks used it at some point in time, so maybe you should too…

Why is the gold-silver ratio so high?

At the time of writing, the gold-silver ratio trades at around 74 after falling from the all-time high levels it reached last year due to the coronavirus pandemic. In 2020, the ratio was trading at 126 – the highest level ever recorded. The reason for that was the huge demand for gold due to economic uncertainty. Since then, the ratio is still trading at relatively high levels, however, it has dropped significantly due to the economic recovery around the world and the increasing demand for silver (especially during the lockdowns and trade shutdowns).

What is the gold-silver ratio right now?

What affects the gold to silver ratio?

Well, the gold to silver ratio simply measures the price of gold in relation to the price of silver. So, it would be better to ask what affects gold and silver prices? Both precious metals are known as safe-haven assets, although gold is the most logical choice as a protection against inflation and uncertainty. On the other hand, gold does not have many industrial uses like Silver.

The bottom line, in periods of economic downturn and stock market crash, the ratio tends to rise due to high demand for gold while in periods when the global economy functions well, the ratio is expected to fall due to the increasing demand for silver. In addition, it is worth noting other factors that might affect gold and silver prices include the US dollar, interest rates, and supply of gold, silver, and other precious metals like Platinum, Aluminum, etc.

What is the ratio of gold to silver in the earth’s crust?

Presently, geologists believe that the abundance of silver is much greater than gold, or in other words, there is approximately 19 times more silver than gold in the earth’s crust.